This proposal has also been discussing on community forum: https://forum.phala.network/t/topic/3389

The proposal is aim to seperate the Phala Mining Reward tokenomic from relaychain, it means that PHA token reward to workers will based on TOTAL workers' ammount from both Phala and Khala, not bonded with either parachain. By merging reward pools, this Gemini Upgrade will help Secure Workers get more rewards on Kusama first, and give free choice to workers to decide if they want to run on Phala or Khala with a same subsidy ratio.

Back in 2021, Khala Network was born as the pre-mainnet of Phala Network to test its tokenomic and the technology. Instead of having two token, the Phala community decided to share the same PHA token on the both sides. It immediately raise a problem: How can the single token power the two blockchains at the same time?

When Khala was launched, to test the mining subsystem and the tokenomic, there's 1% of the token allocated to Khala dedicated for Secure Worker Mining, while 69% is reserved for Phala mining. From the tokenomic whitepaper (link), we have a different set of parameters for the two chains to define the mining subsidy budget, staking requirements, and reward schedule.

Compared with Phala, Khala has a much smaller subsidy allocation and faster halving schedule, because the basic assumption is that Khala is for testing, and Phala is for production usage. There's also the understanding in the the community that Khala will only be kept for small scale testing, or can even be shutdown once the test is finished. 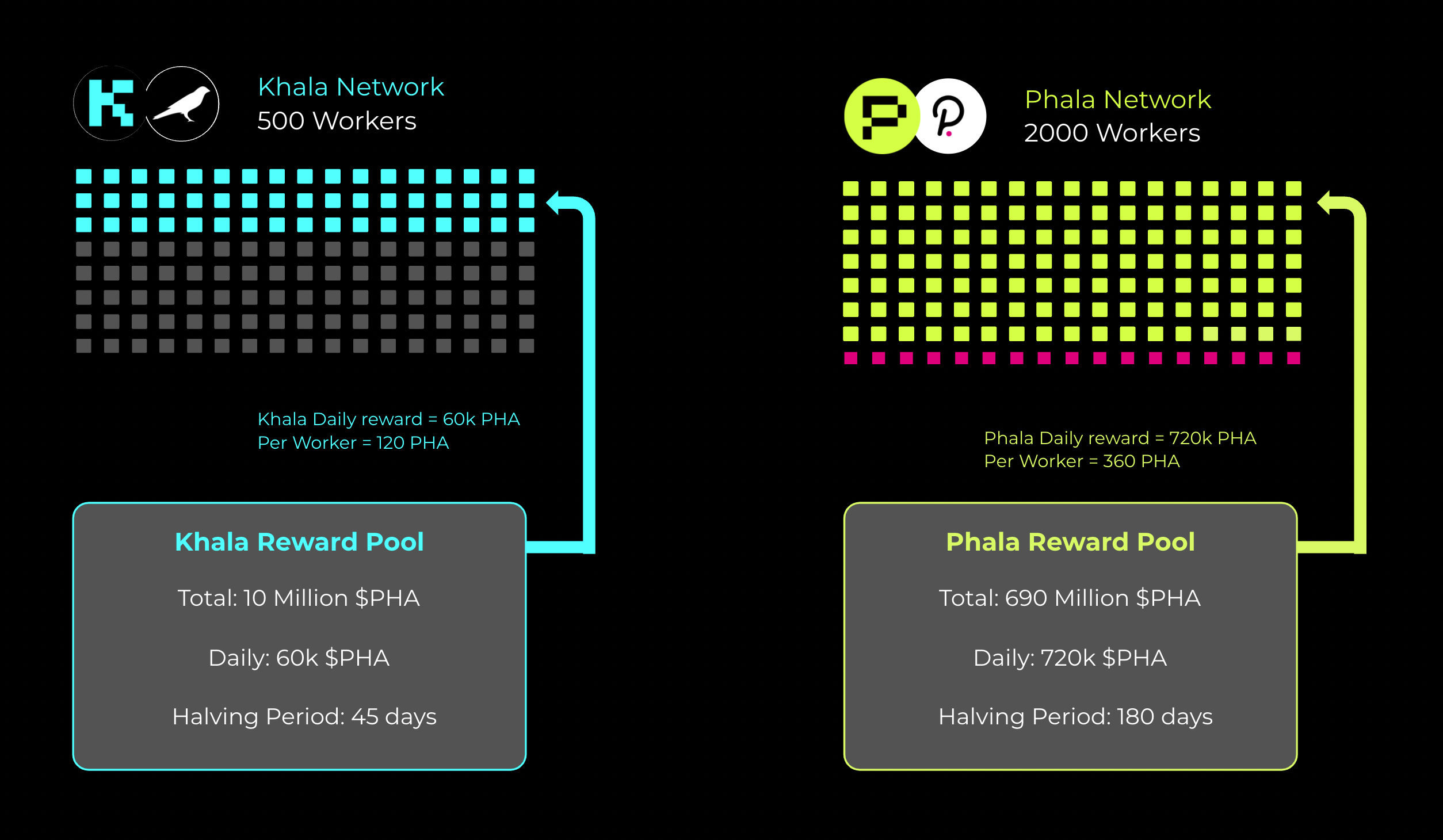 However, Khala may not be just a testbed. We have seen innovative projects built natively on Kusama with prosperity. The real native projects on Kusama may grow to an ecosystem with full of vitality different than Polkadot. Phala Networks, as the Web3 Cloud, should provide the computing resources everywhere with the demand. We definitely don't want to miss the growing Kusama ecosystem.

If we want to equally treat the Phala parachains on Kusama and Polkadot, now it's a good time to reconsider the mining tokenomic and the allocation between Khala and Phala. In the reamining part of this post, we are going to propose a way to unify Khala and Phala tokenomic.

To implement such a system, the two blockchains should share all the parameters (including stake requirement, halving schedule, and the value promised related params) except the subsidy budget. Instead of maintaining two block subsidy separately, there should be an unified subsidy pool shared in the two blockchains. Each chain only get a protion of the full mining subsidy budget, and the sum of that on the two chains should equal to the unified budget, at any point.

After the launch of Fat Contract, we expect workers can get extra rewards by been chosen to run fat contracts. The reward budget on the both sides will be balanced based on the demand (on Polkadot and Kusama). This creates an incentive to drive the miners to move to the chain with more demand by their free choice. Eventually, the reward each miner can receive should converge to a fair level.

To maintain the subsidy budget on the two chains, a bridge between the two chains is required. We call the automatic operation to balance the two chains "Balancing Process". The Balancing Process should happen periodically (e.g. once per day). Once the two blockchains are connected, Phala Network (the parachain on Polkadot) should be responsible to lead the Balance Process, in which it collects the demand metrics from Khala (via the bridge), and determine the split of the subsidy budget, and then assign the new subsidy budget for the next period. The deployment of the new budget can be done by the bridge as well.

Once the Kusama-Polkadot bridge is deployed, we can use XCM to bridge the two parachains more safely.

Besides the mining subsidy, the other tokenomic parameters generally follows Khala's since it has been running stable for the last a few months:

Beyond the parameters, we propose the following changes to improve the mining experience:

The advantage of this proposal is that the subsidy on Phala and Khala is defined by the competition of workers' ammount on each parachain -- there is no longer "mainnet" any more. Even though Phala haven't launch on Polkadot, all subsidy will send out to online workers. 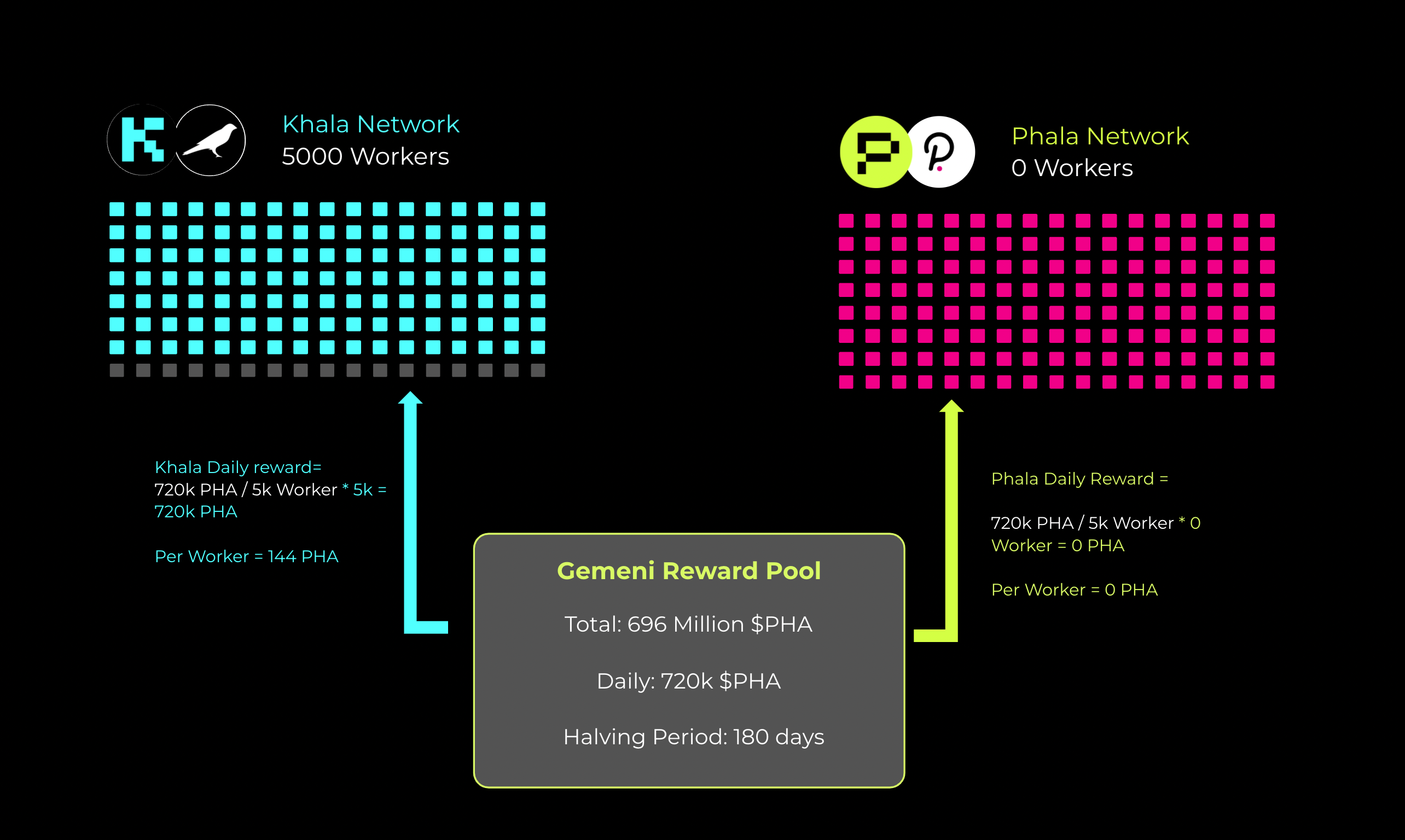 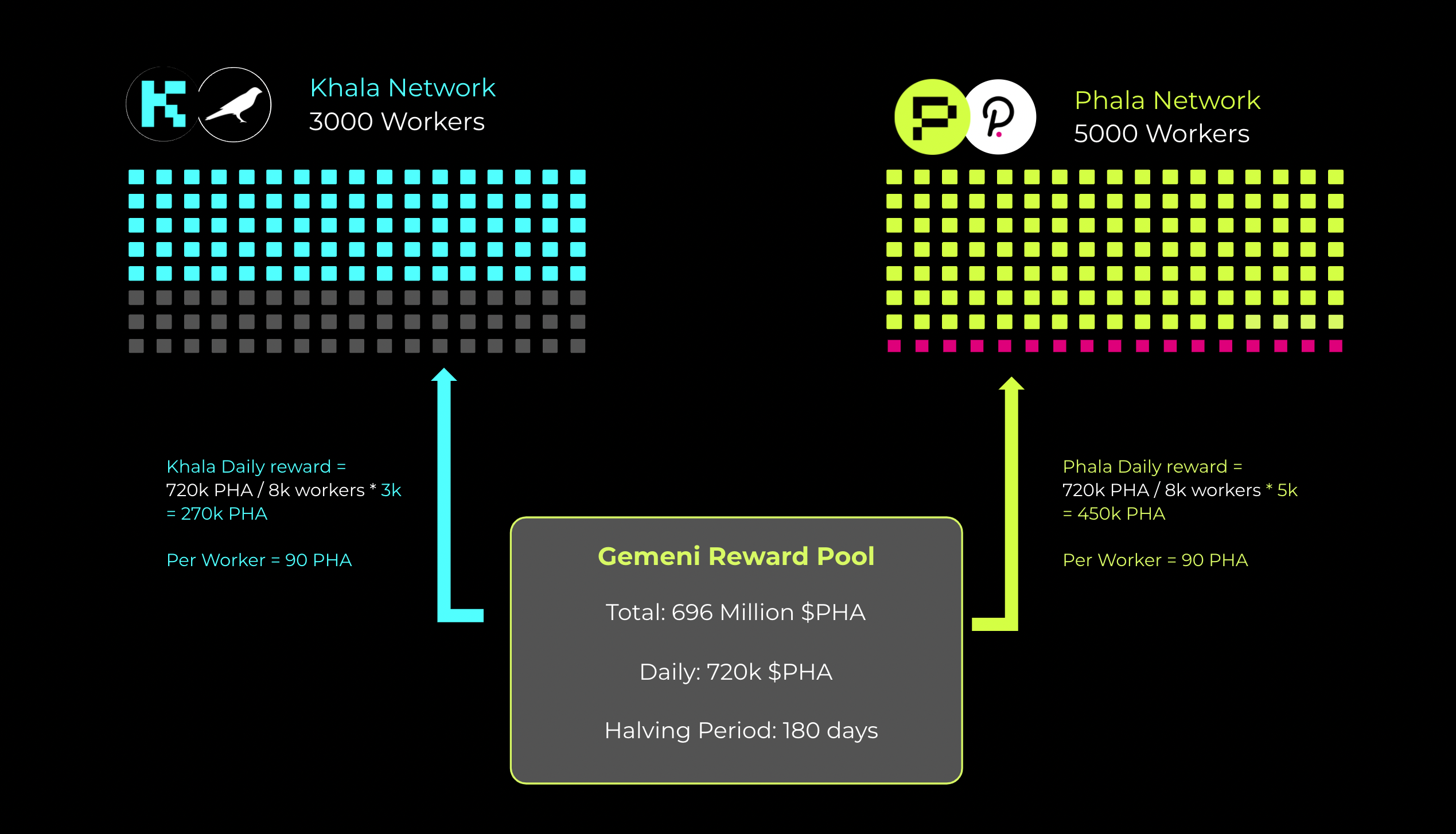